” Maropeng is educational and great fun “

” Maropeng has top quality exhibits, had an interesting, entertaining guide “

” . . . a lot for adults to think about and educational and fun for children “ 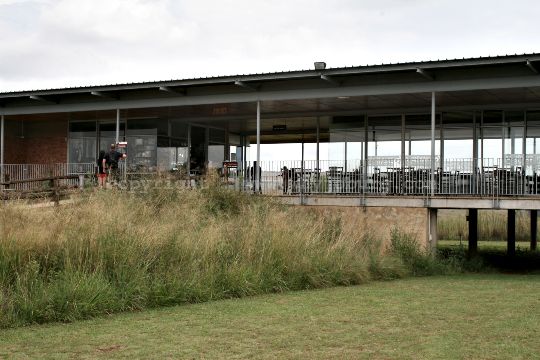 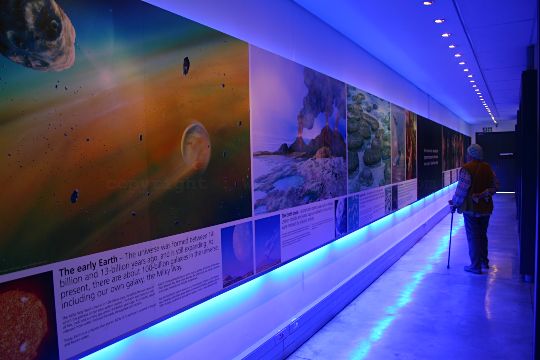 Not far from the Sterkfontein Caves is the Maropeng Visitor Centre, where the theme of our human development, and a peep at our early ancestors, continues!

It’s a modern, world class exhibition, and one of only twelve sites worldwide, that is recognised by the Smithsonian Museum for being influential in promoting the awareness of human evolution.
Great for kids!

Your tour really starts before you get inside the Tumulus building.
Outdoor displays and small excavations, of an Early Stone Age site, that have unearthed, amongst other objects, cleavers and handaxes, line the path.
The early humans that inhabited this area were hunter-gatherers, and it was they who hewed these tools out of the local rock.

At the entrance to the Maropeng Tumulus museum building, you have a choice of following either the ‘Adults’ arrow, pointing to the left, or heading for the ‘Children’s Entrance’, straight ahead.
Following the ‘Adult’ arrow, takes you to a side entrance where the largest display of original fossil hominin material, in history, is on display!

The display consists of a sample of the 1,700+ skeletal bones recovered since 2013, from the Rising Star Cave system, which is part of the Cradle of Humankind World Heritage Site. 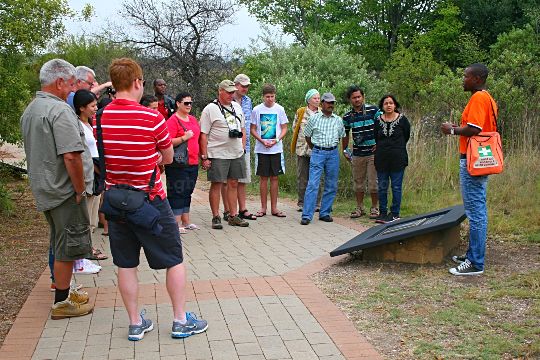 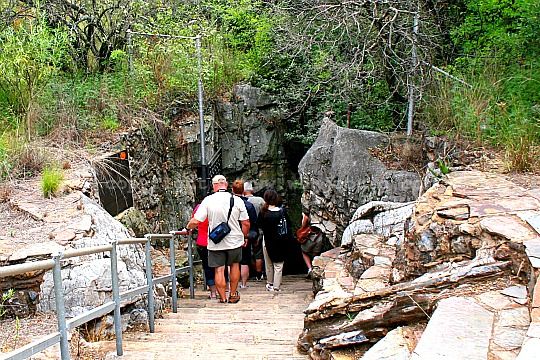 PLEASE NOTE : DUE TO COVID-19 RESTRICTIONS, DETAILS GIVEN HERE COULD BE INACCURATE.
PLEASE CHECK WITH MAROPENG VISITOR CENTRE AT THE NUMBERS, OR THEIR WEBSITE, BELOW!

MAROPENG VISITOR CENTRE IS WHEELCHAIR FRIENDLY
Unfortunately, the Sterkfontein Caves is not.

YOU CAN BUY YOUR ONLINE TICKET HERE

Note: the combination ticket is only available until 13h00 (1.00pm), in order for visitors to have enough time to see both exhibitions.

Prices are subject to change without prior notice.

Booking is essential for all group and school bookings.

MAROPENG VISITOR CENTRE ADDRESS :
On the D400, near Magaliesberg Village
Between the R24 (Magaliesberg) and the R563 (Hekpoort) Roads
8,7 kms from Sterkfontein Caves 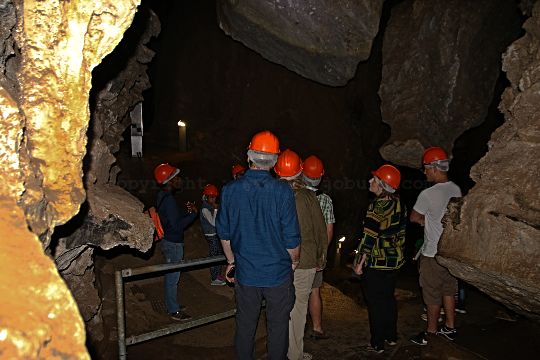 It’s once you’re inside that the fun begins!

A boat ride through time – starting with the present and going back to the formation of our planet earth, followed by the Vortex Tunnel, replicating a Black hole, with its warnings of possible “dizziness, nausea, unbalance and unsteadiness…”, that get you to the start of the museum displays!

The displays are bright, colourful and very interactive, resulting in a hands-on learning experience.

They deal with the formation of the earth, our physiological development from early man and our cultural evolution to where we are today.

On the negative side, the message the exhibits portray is not unique, and some tend to be a bit confusing due to insufficient explanation.

Guides, who are available, are probably essential to you enjoying the experience. 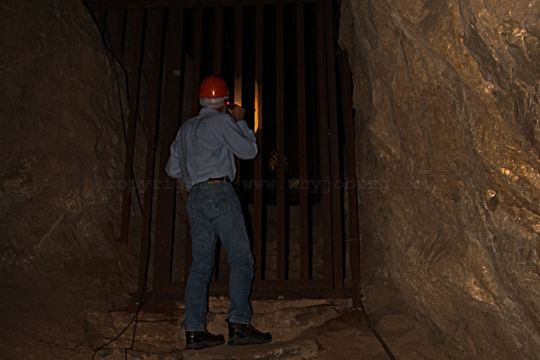 An interesting little side show after exiting the museum, is the Kiddies Cave.
It’s a small, man made hide away for the little ones to explore, that is dark enough to be adventurous. 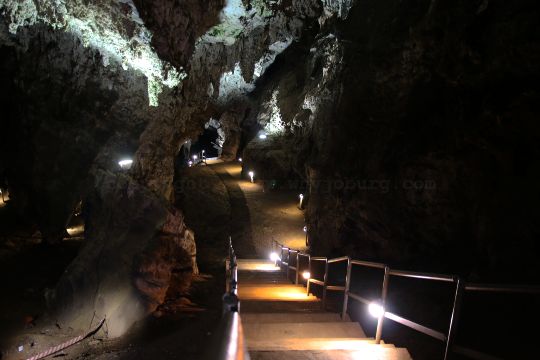 This exhibit has ended and the fossils returned to Wits University for further scientific research, but has remained on this site because of its scientific value.

Rick Hunter and Steven Tucker, two recreational cavers, discovered fossils, of a yet to be identified hominid, in September 2013 in the Rising Star Cave system, in the Cradle of Humankind World Heritage Site

The new species, named Homo Naledi, was announced to the world at a press conference in September 2015 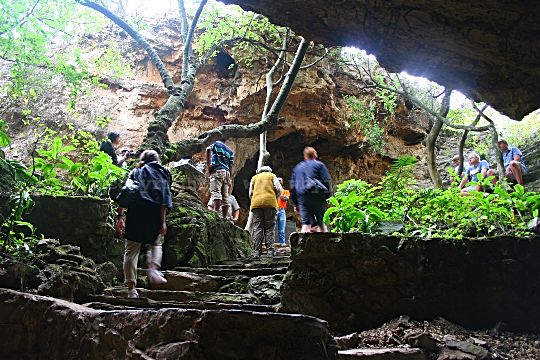 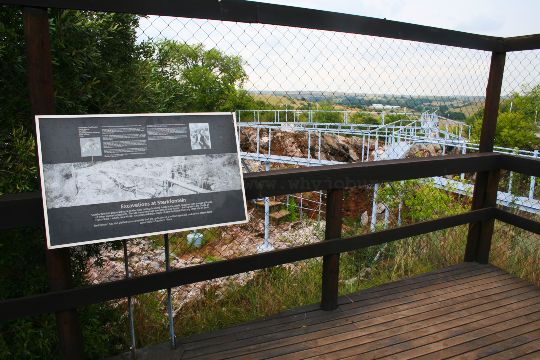 People, fitting certain criteria – due to the nature of the work as well as confined conditions, were needed to excavate the bones.

Palaeoanthropologist Lee Berger, from the University of the Witwatersrand, put an ad. on his Facebook page on 6th October 2013, and the 6 female scientists who were chosen, were given the name ‘Underground Astronauts’
They had no idea what they were coming to, as the expedition was shrouded in secrecy.

Their ‘fate’ was to excavate the bones of Homo naledi from the Dinaledi Chamber, and were given the name because of the danger in entering a shaft, that narrowed to a 175 mm (7 in) opening, to get to the cave, 10 metres (36 ft) below.

The remains of a child and a partial skeleton of an adult male, named Neo by scientists, were found in a second chamber, called Lesedi.

Access to the Lesedi chamber was almost as difficult as reaching the Dinaledi chamber. 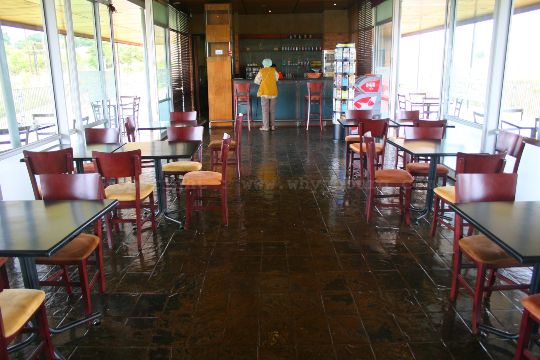 Once back on the surface, you can either go directly back to the Visitors Centre, or via a longer route past the excavations, that have been worked on continuously since 1966.

You walk on an elevated walkway, with a number of information boards, explaining, for example, the landscape and excavations.

The Visitor’s Centre and Restaurant

Back in the Visitors Centre, there is a restaurant that serves surprisingly reasonable meals and makes a very good cappucino!

Whilst every attempt will be made to keep the information on this website relevant and up to date, we accept no responsibility for consequences arising from errors or omissions.
Return from ‘Sterkfontein Caves’
to www.whyjoburg.com Home page