“Start with a trip back in history to the darkest days of apartheid and end with a visit to the Constitutional Court – and the future’s promise of hope!”

“Spent a few hours at Constitution Hill as a stop on the Red Bus – great venue!”

“An amazing experience – the ramparts, the fort and the court are free, but having a guide makes it come alive!” 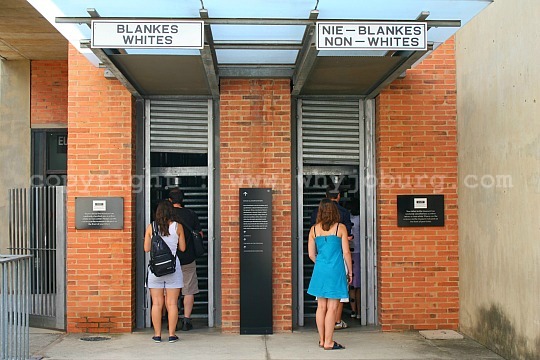 Johannesburg’s Constitution Hill, which is the Johannesburg equivalent of Cape Town’s Robben Island, is one of the most interesting historical precincts in the city.

It has 3 prison museums, and the remains of the Awaiting Trial Block, that shed light on some of the atrocities of the apartheid era as well as the Constitutional Court – which you can visit, even when in session, on the precinct.

– The Awaiting Trial Block
– The Old Fort (and original jail)
– The Women’s Jail
– The Number Four Prison
– The Constitutional Court.

The Boers (‘farmers’ in Dutch or Afrikaans) left the Cape Colony, as Voortrekkers in their covered ox-wagons in what is known as the Great Trek, to escape British rule and seek their own utopia, between 1835-1846.
They settled north of the Orange River, and established their own sovereign Dutch republics – the Orange Free State with a border 70 kms south of Johannesburg and the South African Republic (Zuid-Afrikaansche Republiek), known to the British as the Transvaal Republic – where Johannesburg is, in 1852.

Britain did try a half-hearted attempt to annex the Transvaal in 1877, but the Boers clung to their hard earned independence and inflicted a number of embarrassing defeats on the British during the brief First Anglo Boer War of 1880/1881.
Following this defeat, Britain’s interest in the Transvaal waned until a gold bearing reef, still being mined today, was discovered in 1886, within the borders of the conservative Boer Republic

PLEASE NOTE : DUE TO COVID-19 RESTRICTIONS, DETAILS GIVEN HERE COULD BE INACCURATE.
PLEASE CHECK WITH THE APARTHEID MUSEUM AT THE NUMBERS, OR THEIR WEBSITE, BELOW!

APARTHEID MUSEUM GUIDED TOURS :
An additional R10.00 per person – must be booked in advance
Guided tours for 15 people or more.

Much to the dismay of the President of the South African Republic, Paul Kruger, flocks of ‘uitlanders’ (‘foreigners’ or ‘outsiders’) poured into his puritanical Dutch Republic to grab their riches.
Living conditions for these fortune seekers on the inhospitable and treeless, dusty veld, were harsh, and crime was rife.

To quell this unruly, permissive behaviour, Kruger built a prison in 1892, on the crest of today’s Constitutional Hill.

The strategic position of this old Johannesburg Jail allowed the Boers to not only incarcerate those wrong-doers, but also watch over, and intimidate, the ‘uitlanders’ in the burgeoning town below.

Much to the dismay of the President of the South African Republic, Paul Kruger, flocks of ‘uitlanders’ (‘foreigners’ or ‘outsiders’) poured into his puritanical Dutch Republic to grab their riches.
Living conditions for these fortune seekers on the inhospitable and treeless, dusty veld, were harsh, and crime was rife.

To quell this unruly, permissive behaviour, Kruger built a prison in 1892, on the crest of today’s Constitutional Hill.

The strategic position of this old Johannesburg Jail allowed the Boers to not only incarcerate those wrong-doers, but also watch over, and intimidate, the ‘uitlanders’ in the burgeoning town below. 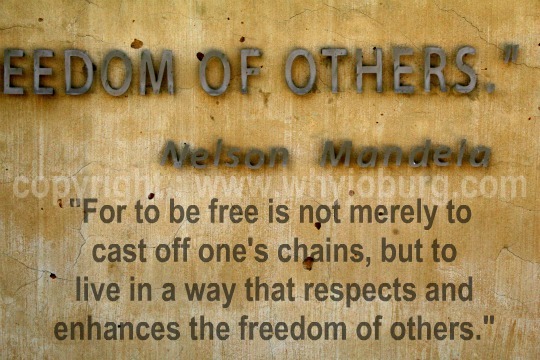 Hidden from the outside world by thick, earth ramparts, is the old Johannesburg Fort which was renovated and restored to its former beauty in 2007/08

The Jameson Raid at the end of 1895, which was a failed attempt by the British to overthrow the Boer Government, was very much a declaration of war!

To control this insurrection, President Kruger built a Fort around cell blocks 1 and 2 between 1896 and 1899, and used prisoners to construct ramparts – which also housed military troops, around the Fort.

The Second Boer War started in October 1899, and Johannesburg was captured by British Forces on 31st May 1900, without a shot being fired from the Old Johannesburg Fort.

The British used the Fort as a jail for the Boer forces they captured, and as a military base until the war ended in 1902. 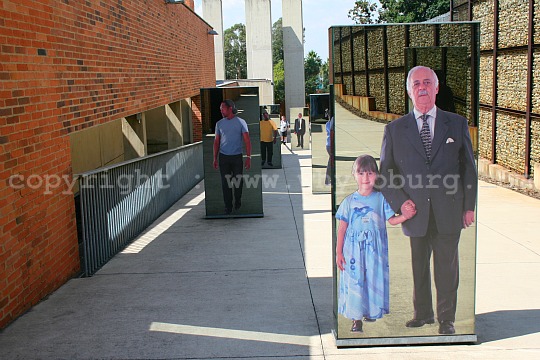 LIFE UNDER APARTHEID : Photographs by Ernest Cole, who is widely recognised as South Africa’s first black freelance photographer, depict the harsh conditions of ‘Life Under Apartheid’.
Ernest Cole died in poverty, in exile, in New York in February 1990 – anonymous and homeless.
South Africa at the time had unparalleled economic growth, but the black community suffered more and more under oppressive apartheid laws.

HOMELANDS POLICY : South Africa consists of a number of ethnic groups, and the Nationalist Government divided the country along tribal lines, with the intention that each ethnic group would be removed into their own tribal Homeland.
The ten planned homelands, made up only 13% of the total area of South Africa.
Having to move to these “independent states”, would rid the white areas of blacks, and deny these blacks their political rights in a white South Africa.
The first to receive its “independence”, and recognised as a sovereign state (only by South Africa), was the Transkei – on 26th October 1976.

THE BLACK CONSCIOUSNESS MOVEMENT : The leadership of the ANC had been annihilated during the 1960s, and with most of them behind bars, a social movement of political consciousness, ‘the Black Consciousness Movement’, that rejected the values of whites, and aimed at boosting black self-worth, was started by a number of number of young university students.
Stephen Bantu Biko was chosen as their leader.
They constantly confronted the Government, and this brought them into conflict with the security police.
Key members were banned and Steve Biko, aged 30, was murdered on 12th September 1977, whilst in police custody.

POLITICAL EXECUTIONS : South Africa enforced the death penalty, and had one of the highest execution rates in the world during the fight against apartheid.
Political Executions resulted in 131 people being executed for various terrorism crimes, and a number tortured to death – whilst in police custody, although the police claimed they committed suicide.

16th JUNE 1976 : THE SOWETO URRISING : On 16th June 1976, 20,000 school children protested against apartheid and their second class status, by marching through Soweto.
The unrest spread to the rest of the country, and it became the single biggest challenge to the apartheid system.
The uprising was eventually crushed, but it became a turning point in the liberation of South Africa, and the beginning of the end for apartheid.
Hundreds of civil organizations and anti-apartheid groups that joined forces to form the United Democratic Front, were later joined by the Congress of South African Trade Unions (COSATU), in their support of the ANC and a democratic South Africa.

THE TOTAL ONSLAUGHT : Despite this Total Onslaught, the Government continually enforced apartheid – but at the same time started reform.

ROOTS OF COMPROMISE : The Roots of Compromise took hold in 1987, when a delegation of top businessmen secretly met the exiled ANC in Dakar, and in 1988, when Nelson Mandela, whilst still in prison, invited the Government to discuss the dismantling of apartheid with the ANC.
In August 1989, PW Botha, the staunchly conservative, uncompromising President of South Africa, suffered a stroke and was replaced by F W de Klerk.
Shortly after assuming the party leadership, FW de Klerk called for negotiations for a democratic South Africa and in February 1990, lifted the ban on the African National Congress (ANC) and the Communist Party of South Africa and released all political prisoners – the last of whom was Nelson Mandela.

NELSON MANDELA’S RELEASE : Nelson Mandela was released from Victor Verster Prison in Paarl on 11th February 1990, after 27 years in prison. 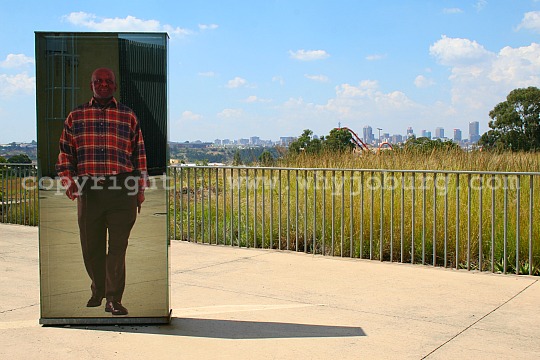 ON THE BRINK : The country teetered ‘On the Brink’ of uncertainty after the unbanning of the political organizations and Nelson Mandela’s release, with a negotiated way forward between two arch enemies!

THE NATIONAL PEACE ACCORD AND THE BILL OF RIGHTS : The ‘National Peace Accord and Bill of Rights’ set out a common purpose to bring an end to political violence and to set out the codes of conduct, procedures and mechanisms to achieve this goal, and the government and the ANC met on a number of occasions to remove obstacles that both parties felt stood in the way of a negotiated settlement.
Members of twenty-seven political organisations, homeland and national government signed the National Peace Accord of 14 September 1991, which opened the way for the negotiations for the Convention for a Democratic South Africa (CODESA).

27th APRIL 1994 ELECTIONS : The ’27th April 1994 Election’ marked the first opportunity for non-whites to cast their vote in a national election.
The results of the peaceful election, saw the ANC win 63% of the vote, the National Party 20% and the IFP 11%.
These parties, according to the CODESA negotiations, formed the Government of National Unity.

THE SOUTH AFRICAN TRUTH AND RECONCILLIATION COMMISSION : ‘The South African Truth and Reconciliation Commission (TRC)’, was set up by the Government of National Unity, and chaired by Archbishop Desmond Tutu, to restore justice to those who were identified as victims of gross human rights violations between 1960 and 1994.
Perpetrators of violence could also give testimony and request amnesty from both civil and criminal prosecution.

MIRACLE AND BEYOND : History was made, when for the first time, power was handed down from a minority to a majority government, without bloodshed or external force.
Using newspaper cuttings and television interviews, ‘The Miracle and Beyond’ shows the hopes and fears of South Africans, and allows you to add your own opinion via a recording booth.

THE NEW CONSTITUTION : The core values of ‘The New Constitution’ – the new flag and the National Anthem – “Nkosi Sikelel’ iAfrika”, are on display.

A PLACE OF HEALING : By visiting the Apartheid Museum in Johannesburg as ‘A Place of Healing’, you not only witness some of mans most evil deeds, but also the resilience of the human spirit to persevere and overcome.
The bushveld garden, once out of the museum, is a place to reflect on both the past, and the future!

GARDEN : A peaceful, indigenous Bankenveld Highveld garden offers solace, and allows one to reflect on the horrors just witnessed, after leaving the museum building.

RETAIL SHOP AND RESTAURANT : A retail shop, selling a really good selection of books, clothing and tourist memorabilia as well as a restaurant selling light meals, are in the garden just before the exit gate.

APARTHEID MUSEUM ORIGINS
Opened in November 2001, the Apartheid Museum in Johannesburg is a world class, but often disturbing, interactive exhibit that explains the cause, the implementation and the inevitable collapse of apartheid via dozens of videos and static displays.

Apartheid was based on a Christian doctrine, and as gambling was considered a sin, casinos were not allowed in South Africa under the Nationalist (Apartheid) Government.
When the ANC came to power in 1994, and religion was separated from the State, casinos were once again allowed to operate, but under strict conditions.
One stipulation in applying for a casino license was that bidders needed to show how they would attract tourists, create jobs and grow the economy.
The consortium that was awarded a license for the Gold Reef City Casino, committed to build The Apartheid Museum.

AWARD WINNING BUILDING!
The exterior has been designed to be part of the landscape, and the interior design is part of, and adds to, the exhibits.

The long ramp which leads to the top of the man-made earth mound, and and on to the entrance of the museum, is flanked by a high symbolic boundary wall of rough steel gabions filled with rock, which is reminiscent of the legacy of gold mining; at the top of the mound, you look over the grass covered roof and onto the backdrop of the Johannesburg skyline, before a cascading staircase drops you down to the entrance of the museum!
The interior design has differing ceiling heights with few windows, as well as a number of small and cramped display areas which become less oppressive as the displays move towards the dismantling of apartheid! 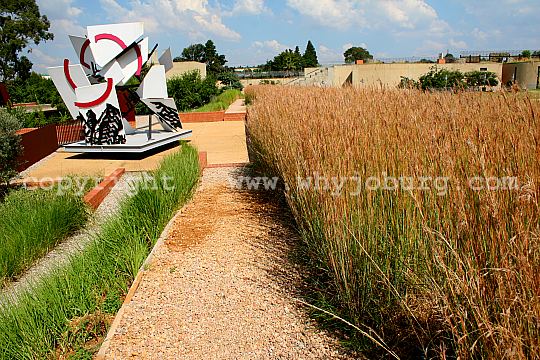 Whilst every attempt will be made to keep the information on this website relevant and up to date, we accept no responsibility for consequences arising from errors or omissions.
Return from ‘Apartheid Museum’
to www.whyjoburg.com Home page